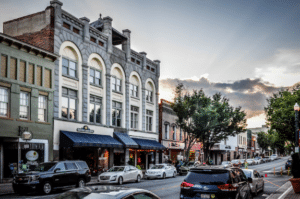 Do you want to learn about the city of Concord, located in the state of North Carolina? If so, then keep reading to find out a few things about this growing place.

At the time of writing, the most recent census was the 2010 one that put the city’s population at just under 80,000. Estimates in 2018 added nearly 15,000 more people to the total. 2015 records showed that Concord was the 16th-fastest-growing economy anywhere in the United States. It’s the county seat of Cabarrus County, as well as the largest city. It’s also the second-biggest city throughout the Charlotte Metropolitan Area, and one of the state of North Carolina’s top 10 cities in terms of population size.

The city won a 2004 All-America City Award. It sits close to the center of the state’s Piedmont region, where it sits about 20 miles to the northeast of the center of the city of Charlotte. The main thoroughfare is Interstate 85 that runs down through Charlotte towards Atlanta to the southwest and up through the Triangle area up to Richmond, Virginia to the northwest. Concord has its own regional airport that serves private aircraft and a number of low-budget carriers. Most air travel for residents of Concord, however, happens through Charlotte-Douglas International Airport. Train service is also provided through the area, as is interstate bus services such as Greyhound and MegaBus.

The city name of ‘Concord’ means ‘with harmony’. This was a name chosen following a long dispute between Scotch-Irish Presbyterians and German Lutherans who originally settled the area around 1750. The dispute centered around where the local county seat should be established. Concord was incorporated by 1806, and considered a rather old place by American standards. Today, there are markers in the downtown area identifying what are believed to be the boundaries of the original town.

Sitting in the state’s central region known as the Piedmont, the area is characterized by forest and rolling hills. Any land that gets left untended usually returns to a native forest state within just a few years. The climate features cool winter seasons with some but not much freezing weather. Snowfall is rare, and typically doesn’t accumulate. Ice can be more of a problem. Summer seasons are hot and humid, particularly through July and August. Spring and fall are usually mild to beautiful and last a long time given how little actual winter weather happens. Golfers, especially those that move here from northern states, love places like this given how they can play pretty much every day of the year. Winter high temperatures average around 43F, with typical daily lows of 29F. Summer average highs are 79F, although many days can launch into the 90s or higher. Winter lows can fall into the teens when it is dark, but most days still get back above freezing. Rainfall is a generous 43+ inches per year, although it’s not totally consistent. February and April tend be the driest months. Winter precipitation is more frequent, but lighter, as the season only has 55 percent sunshine time. Summer has less rainfall but it comes down harder. Pop-up thunderstorms can be common in the late afternoon and early evening during the warm months, which feature 70 percent sunshine time.

The city’s population is more than two-thirds white. African-Americans and blacks account for over half of the rest of the population, with Latinos and Hispanics being the next largest group. At the time of writing, Concord had more than 30,000 housing units, with a 90+ percent occupancy rate. The entire metropolitan area around Charlotte has been growing rapidly for several consecutive decades. Many companies have relocated here from the North and Rust Belt states, drawn to lower taxes and cheaper costs of living. An abundance of buildable land has fueled this growth outward in nearly every direction, although Mecklenburg County is now at a point where it has to build up more than out, leaving a lot of development happening in suburbs such as Concord, where many residents live or reside but commute into Charlotte from. Still, there are many jobs in Concord itself, as well as nearby, as the University Research Park of Charlotte is just a few miles down the highway.

Median incomes for families and households average around $50,000, with per capita incomes being just under half of that. Less than 10 percent of the population was under the poverty line.

Carolinas HealthCare System NorthEast is the largest employer in the area, putting over 4,000 to work. Cabarrus County Schools and nearby Kannapolis City Schools employ thousands as well. The City of Concord and the Cabarrus County Government also combined put another 2,000 people to work. Two major areas of economic activity include the Charlotte Motor Speedway and Concord Mills, an outlet mall. Downtown Concord also has shopping that features merchants offering arts and crafts, fine collectibles, and antiques.

The Concord City Government has a long-running history, as a courthouse was the central government feature here going back centuries. What locals call the Historic Courthouse was finished in 1876. It now is home to the Davis Theater and the Cabarrus Arts Council. It was listed on the National Register of Historic Places back in 1974.

The city government provides numerous services to residents, including the state-mandated police, fire, solid waste, water, wastewater, and street maintenance. Other services the city provides are transit options, environmental protection, community development programs, zoning and planning, and parks and recreation. They city also has its own educational system, including a dozen elementary schools that feed into four middle schools followed by five high schools. Several private schools are also available.

The Charlotte Motor Speedway is actually located in Concord, and it’s home to some of NASCAR’s biggest annual races. The track is actually host to over 300 events over the course of a typical year, including the semi-annual Charlotte Auto Fair. Also, many years, the spring Carolina Rebellion or other summertime music festivals will take advantage of the considerable parking, amenities, and space that’s available.

Drag racing happens at the zMAX Dragway with its four-strip. It sits on 125 acres of the speedways property, directly across Highway 29.

Concord Mills is undoubtedly the other big draw in the city that brings in people from outside the city limits. This shopping mall encompasses 15 anchor tenants and a movie theater in a building that has over 1.3 million square feet. It sits only several hundred feet from the border of Mecklenburg County, which is home to Charlotte, as well as the city limits of Charlotte. it sits roughly 12 miles away from the Uptown area of Charlotte, with easy access from Interstate 85 and Interstate 485 which is the Outer Belt running around Charlotte. This mall is actually the biggest tourist attraction in the state, having drawn in nearly 18 million visitors in 2005 alone. Anchor stores include familiar names like Best Buy, Books-A-Million, and AMC Theaters, but there are also other options not frequently seen in the regions, like a Sea Life Aquarium and The LEGO Store. There are also outlet stores for brands like Disney and Old Navy. A number of other outlets and retail stores line the main road and area around Concord Mills, whose food court brought the first ever Popeye’s Louisiana Kitchen to Charlotte’s metropolitan area. While a source of considerable economic activity for the city of Concord, this mall is also a prevalent source of congestion and traffic on an already busy stretch of Interstate 85, sometimes backing up traffic for miles.

Entertainment options other than shopping or NASCAR aren’t hard to find, given the proximity of Concord to the larger city of Charlotte. Many entertainment acts and musical tours make stops at the Spectrum Center in uptown or one of several outdoor concert venues. The Spectrum Center is also host to NBA action, home of the Charlotte Hornets and teams that visit them. A nearby football stadium is home to most Carolina Panthers games and NFL teams. Minor-league hockey and baseball also happen either uptown or close to it.

Weekend getaways are easy to do from Concord, as the Blue Ridge and Appalachian Mountains just over two hours to the west, and the beaches of both Carolinas about four hours to the east. In some winter months, skiing and snowboarding are even possible on the artificial snow slopes of resorts in North Carolina and West Virginia.

Now that you’ve read this article, you know a few more things about Concord, North Carolina than you did before. Whether you’re just curious because you pass through it on your travels, know someone who lives there, or are considering visiting or even moving there yourself, this knowledge should help you broaden your horizons or at least make some conversation with others.